The Angels have spent the last month patching the holes in their roster. Rebuilding a bullpen nearly from scratch has been new general manager Perry Minasian’s main project.

The checklist off which Minasian is working might be longer than it seemed when he took the job last month.

In a videoconference Friday, Angels manager Joe Maddon suggested young outfielder Jo Adell might need more development in the minor leagues. Should they commit to sending him back, the Angels likely would need to acquire an outfielder to join Mike Trout and Justin Upton. Taylor Ward and Jared Walsh are internal options who temporarily could take Adell’s place.

Adell, 21, has been the Angels’ most heralded prospect since Trout’s arrival, but he had a disconcerting start to his major league career. He was called up Aug. 4, almost two weeks into the 60-game season. Like all rookies who debuted in 2020, he didn’t get at-bats or defensive reps in the minor leagues. His work was limited to intrasquad scrimmages.

Adell wouldn’t have received such an early opportunity had it not been for the struggles of Upton, a veteran who opened the 60-game season batting .099 with a .392 OPS and 28 strikeouts. It was the worst 20-game stretch of Upton’s 14-year career.

Adell didn’t provide much relief. He was hitting .173 with 35 strikeouts by the end of August. He also had made a number of defensive mistakes, including a four-base error in Texas. The trend was so alarming that Maddon at times worked with Adell before games.

Adell’s debut season wasn’t all bad. He assembled a highlight reel that featured a home run robbery of Houston’s George Springer in a doubleheader and a two-homer night in which one of the balls left his bat at an astonishing 107 mph.

But Adell’s performance — a .161 batting average and .478 on-base-plus-slugging percentage coupled with three errors and multiple negative defensive ratings — left enough to be desired that a return to a lower level might not be off the table if a minor league season is staged next year.

“He needs more time in the minor leagues, no question,” Maddon said on a Zoom call that replaced the media session conducted every year at the winter meetings. “I’m certain, given that opportunity, you’re going to see what you thought you were going to see in the first place. That was a tough moment for him last year. The way it started, it didn’t start really well for him. And it started spinning very quickly.”

Of course, Adell could still force the Angels to reconsider with an impressive showing in spring training. Maddon warned against discounting the potential of Adell, who is 6 feet 3 and 215 pounds and boasts dynamic athleticism as well as high-end power.

The lack of formal playing time received before his call-up Aug. 4 wasn’t the only factor to hurt Adell in 2020. His agent, Scott Boras, believes Adell missed out on mentorship opportunities because of the strangeness of the 2020 season. The limitations of the players’ schedules and the restrictions on their behaviors often kept Adell from getting advice from veterans when he most needed it.

“When you’re a young player and you’re around, particularly, superstars, what they can say to you in just the normal course of the day, what they can say to you pregame and postgame — all those things were eliminated for these guys,” Boras said in a lengthy videoconference earlier this week. “For a young player, coming [in] at a young age, you’re highly athletic and you know what you’re capable of doing. To establish a routine, a method [is important]. You didn’t get a chance to see a lot about what other players did day to day.

“From that standpoint, getting that access back to where Jo can get that information and apply that to his ability, I think you’re gonna see a player that is very, very gifted and has a great future ahead of him. Really, it’s more about adapting to an environment in a normal way.”

Two-way star Shohei Ohtani remains on track to form part of the Angels’ starting rotation next season. Ohtani had no setbacks rehabilitating the forearm strain that ended his return to the mound after totaling 1⅔ innings over two early-season starts. “I want it to be in pen,” Maddon said of Ohtani’s place on the depth chart of pitchers. … Minasian added two more executives to his front office: Brian Parker of the Dodgers and Ray Montgomery of the Milwaukee Brewers. Parker is an international cross-checker. Montgomery is a former major league player who directed scouting efforts. Most recently, he served as vice president and special assistant to the general manger. … Maddon confirmed the Angels’ interest in catcher James McCann, who signed with the New York Mets last week. Should they not add through free agency or trade, Maddon would be comfortable relying on backstops Max Stassi and Anthony Bemboom. … Angels first base and outfield coach Jesús Feliciano will not return to Maddon’s staff in 2021. The rest of the staff was retained, including pitching coach Mickey Callaway.

5 takeaways from the Rams’ season-ending loss to the Packers 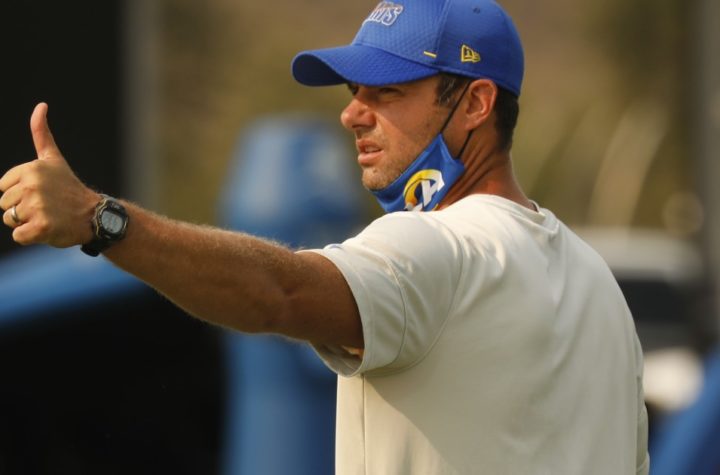 5 takeaways from the Rams’ season-ending loss to the Packers