At a hospital near South Los Angeles, doctors debate whether an elderly patient should be hooked to one of the few remaining ventilators.

Meanwhile, nurses at Ronald Reagan UCLA Medical Center in Westwood fear they are treating too many patients to provide them all with the best care.

And for emergency medical technicians, racing the sick to hospitals has become an obstacle course, with not enough beds for the hundreds of patients in need. Once an ambulance that has responded to a 911 call finds a hospital, it can take up to 17 hours to offload the patient.

These are dark days for Los Angeles County doctors, nurses and EMTs, marked by levels of death once unimaginable in the United States, despite tireless efforts to treat patients.

“It’s a war zone,” said one doctor at an L.A. County public hospital. “The way most people leave is by dying.”

But amid the exhaustion and anguish of the last several weeks is something worse: fear that the next few weeks will be even more dire.

Another COVID-19 surge, fueled by the recent holidays, is beginning to swell, and the looming question is how big an uptick hospitals will face. Officials say even small increases in demand could trigger grim measures that would further compromise care.

Already, so many people are dying in L.A. County that hospital morgues and funeral homes are often full. In the last week, 200 people a day were dying of COVID-19 in the county — more than the number of deaths from all other reasons combined, which average 170 a day.

A doctor at one of L.A. County’s public hospitals has heard “families wail on the phone, in agony that their loved one is dying.”

“We spend our days calling families to let them know their loved one has exhausted all medical treatment and are going to pass away despite our best efforts,” the physician said.

The hospital’s emergency room is packed with patients waiting to get into the intensive care unit, where space typically opens up only when someone dies. Patient care is suffering because ER staffers aren’t trained to care for ICU patients and have many of their own to attend to, the doctor said.

But the next phase of the pandemic could be worse. L.A. County hospitals so far have generally avoided having to make the most heart-wrenching decisions: choosing who receives aggressive lifesaving care and the limited time of the best-trained professionals and equipment, and who will be treated only for comfort as they die. Teams of triage officers — usually led by critical care and emergency doctors — would make those calls.

At Ronald Reagan UCLA, there are tents outside the ER to triage and treat the patient overflow. Staffers are struggling to keep up as they are assigned more patients than they can handle, said ER nurse Marcia Santini. “We have a real unsafe situation,” she said. “It’s really scary.”

The state last month granted waivers permitting hospitals to increase the number of patients nurses can treat at one time. California law typically allows ER nurses to be assigned no more than four patients, but the loosening of regulations has bumped that up to six at some hospitals.

“We do not shy away from hard work. We do not shy away from taking care of patients. But what we do not want is to work in an unsafe environment, and that’s what it’s become,” Santini said. “We understand we’re going through unprecedented times, but if we don’t have enough staff in these areas or the equipment, then it’s really hard to take care of somebody.”

The once-clear divisions between COVID and non-COVID patients have broken down as the hospital fills up, she added. In the ER, she can treat a COVID patient minutes before seeing someone with another illness.

In response to Santini’s comments, UCLA Health System said in a statement that it follows state-mandated staffing ratios and has adequate supplies of personal protective equipment to keep nurses safe.

“The safety and well-being of UCLA Health nurses, our other health care workers and our patients is our overriding priority at all times. We understand the anxiety created by the high volume of COVID-19 patients and associated workload, and we value our staff’s dedication to high-quality, compassionate patient care,” the statement said.

Other hospitals are already facing tough decisions about how to distribute limited resources. A nurse at St. Francis Medical Center in Lynwood said providers discuss how to distribute the scant supplies of high-flow oxygen and BiPAP machines, which help COVID-19 patients breathe. A doctor at the hospital described a recent argument about whether to put a critically ill patient on one of the remaining ventilators. The team ultimately decided not to.

“This kind of scenario is going to continue happening, and it’s sad and traumatic for medical teams to be put in this position on a daily basis,” the doctor said.

At St. Francis, any separation between COVID and non-COVID patients has disappeared, with the ER functioning as “an open-air ICU,” the doctor said. Nurses are assigned more patients than they can handle, and patients “line the hallways, unmonitored.”

The problems extend outside hospital walls. Emergency medical technicians who respond to 911 calls are dealing with bottlenecks, extreme wait times and sickened staff.

“While we’re trained to deal with crises, something like this has never been seen in anybody’s lifetime that’s in healthcare right now,” said Tom Wagner, chief executive for the Western region of American Medical Response, one of the country’s largest ambulance service providers.

AMR and Care Ambulance Service, a provider in Los Angeles, Orange and Riverside counties, are responding to a combined 1,500 emergency calls a day, officials said — roughly 30% more than in the earlier months of the pandemic, when calls decreased during initial stay-at-home orders.

The Los Angeles Fire Department, which provides ambulance services within the city, is responding to 800 to 1,000 emergency medical calls each day.

The flood of patients, along with increasingly sick healthcare workers and the lack of ICU beds, is resulting in crippling delays when it comes to offloading patients at hospitals.

Before the pandemic, an ambulance could be back on the road within minutes of arriving at a hospital. Now, EMTs are regularly waiting four, five or even 10 hours to offload a patient, said Jeff Lucia, Care’s communications director. On Wednesday, “I heard as much as 13,” he said.

“That’s time that a patient is on an ambulance gurney, which is a little uncomfortable for them, at a hospital waiting to be brought in,” Lucia said, adding that even if Care were to put more ambulances on the road, most would end up just “sitting there.”

Ambulance crews are also experiencing a reduction in staffing due to the spread of the coronavirus. More than 170 of the LAFD’s responders are in isolation due to COVID-19, said Dr. Marc Eckstein, the department’s EMS Bureau commander. Meanwhile, “several dozen” of AMR’s 500 L.A. caregivers are in various stages of quarantine on any given day, Wagner said.

The L.A. County Emergency Medical Services Agency has issued a directive advising ambulance crews to conserve oxygen for patients whenever possible, but Lucia said the contents of the small tanks within ambulances are being used up during the long delays outside hospitals.

Both AMR and Care said they have developed contingency plans to redistribute oxygen and PPE, if necessary, to prevent dangerous shortages.

The county’s directive also told ambulance crews not to transport to hospitals patients who no longer have a pulse, can’t be resuscitated at the scene and have an extraordinarily limited chance of survival — a scenario that is increasingly likely as the number of sick patients climbs. Eckstein said cases of cardiac arrest more than doubled in November and December compared with 2019, a reflection of the impact of COVID-19.

“It’s really a true nightmare,” Santini said, “because you’re being forced to do things you would never do.” 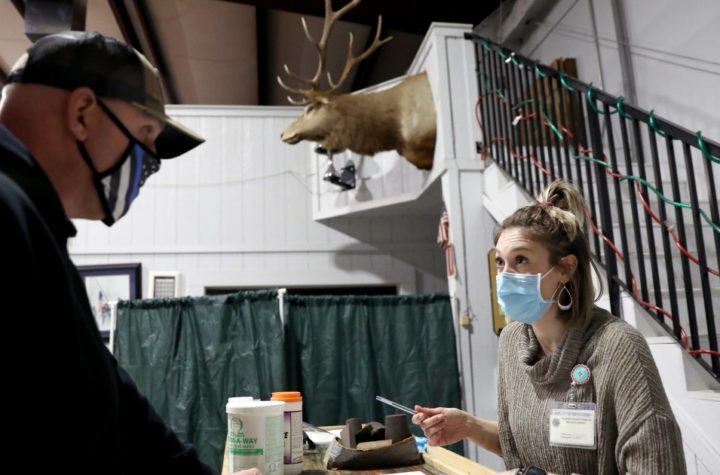 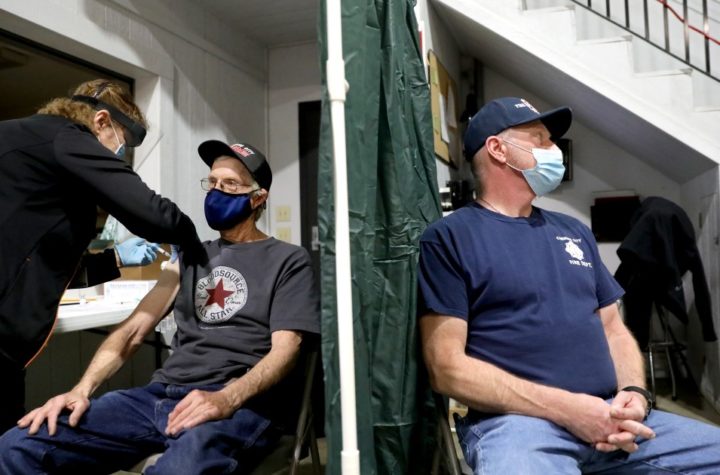 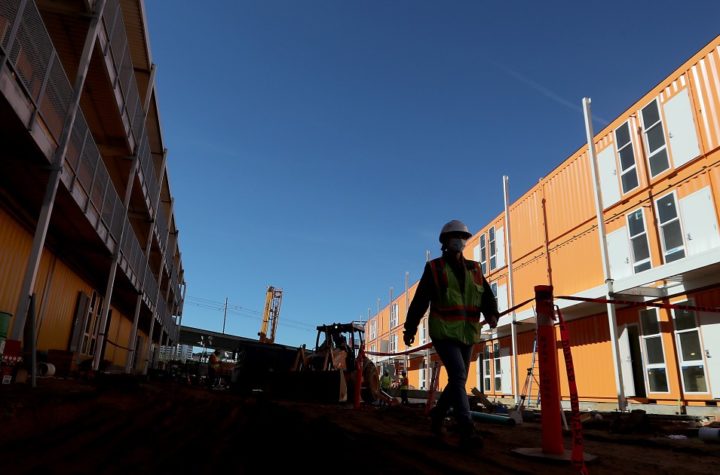 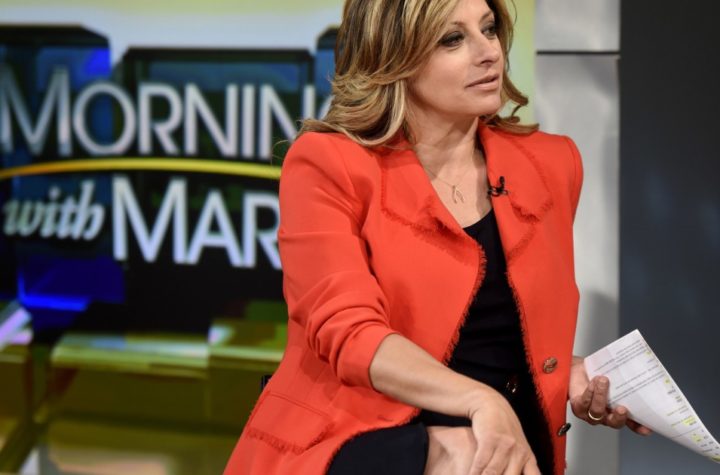