At a time when officials are pleading with residents to not leave their homes because of COVID-19, Juan Garcia rode the bus to a downtown L.A. court to defend against getting evicted from his.

The disabled widower used a cane as he navigated Stanley Mosk Courthouse, waited among dozens in a hallway for his hearing, and then asked a judge for more time to secure low-income housing — at least another month or two. The judge set an eviction trial for April.

“I don’t know what I’m going to do,” Garcia, 60, said in an interview outside the courtroom as he wrestled with the prospect of homelessness.

It’s a scene that plays out daily in the Los Angeles County Superior Court system — the nation’s largest — which is still holding in-person hearings, including eviction proceedings and trials, despite the recent deaths of three court employees from COVID-19 and warnings that being inside with others can easily spread the virus.

In traffic courts, scores wait in hallways and courtrooms to contest months- or year-old speeding citations. In criminal courts, shackled defendants sit with masks drooping off their face, and some lawyers remove their masks when addressing a judge. One judge even allowed a witness to testify without a mask.

And although lawmakers instituted some eviction “moratoriums,” which have reduced the flow of eviction cases, such measures typically require tenants to still come to court to demonstrate why the “moratorium” applies. Often, moratorium is something of a misnomer, as the measures may not stop landlords from filing eviction lawsuits.

Since March, L.A. Superior Court has taken steps to significantly cut down foot traffic, and officials estimate 65% fewer people circulate in the system’s 38 courthouses than before the pandemic. About 4,500 people appear remotely each day for hearings, and Ann Donlan, a court spokeswoman, said that all courtrooms — about 600 across the county — have the capability to conduct remote proceedings.

But many in-person hearings continue, especially in criminal courts, which held nearly 70 jury trials in the final four months of 2020. Sometimes, the parties in a case insist on an in-person hearing. Some litigants lack internet or phone access, or don’t know a remote option is available. And unless a litigant has taken the steps to secure a waiver from the court, each remote appearance comes at a cost: $15 for audio and $23 for video.

In eviction cases like Garcia’s, where tenants have just five court days to respond and most tenants lack legal representation, attorneys have told The Times that judges are often requiring in-person proceedings, jeopardizing the health of lawyers, clients and court staff.

“Every single day the courts are going through procedures without precautions to keep people safe and holding proceedings that result in people getting kicked out onto the street. It’s a public health disaster,” said Adam Murray, the executive director of Inner City Law Center. “If you walk into eviction or traffic courtrooms, you are not seeing wealthy or middle-income people. It’s poor people who have to go in and adjudicate their cases in person.”

Staff and legal groups have pressed for more rigorous methods of limiting the public from entering courthouses, like temperature checks, to no avail.

So far, L.A. Superior Court leaders have balked, pointing to officials in Sacramento.

“Since the pandemic began, the legislature has passed new laws that limited evictions and mandated how these cases are to be handled, balancing the rights and needs of the opposing sides,” said Donlan, the court spokesperson, in a statement. “The Court is bound to follow these legislative mandates.”

She noted that courthouses had installed plexiglass in 6,500 locations to enhance safety, added signage about social distancing, and installed hand sanitizer dispensers. Most members of the public now need appointments to enter.

In January, three court staffers died after testing positive for the coronavirus, and since March, at least 445 of the court’s 5,100 staff and judges have tested positive, said Donlan, who noted the court’s infection rate was about 1.4% lower than the countywide rate.

Still, it is unclear how many who pass through the courts have gotten COVID-19. About 120 L.A. County district attorney’s office employees tested positive, a public defender died of COVID-19 last year, and in the Sheriff’s Department, which provides security for the county’s courthouses, more than 2,800 employees have tested positive.

Begonya De Salvo, who interprets proceedings for Spanish speakers in the Clara Shortridge Foltz Criminal Justice Center, said she had to purchase her own face shield and a second mask to protect herself. Read also : Op-Ed: We rigorously test vaccines. Mask wearing, distancing and hand washing deserve the same treatment.

“I’m inside and I’m shaking because I know COVID is there, all the time, day after day after day,” De Salvo said. “And the proof is that people get infected and courtrooms are being shut down.”

In December, a court reporter at the Criminal Justice Center tested positive for the coronavirus, prompting administrators to close the courtroom where she worked. But when an interpreter who had also worked in that courtroom sought permission to quarantine at home on paid leave, she was denied, according to the interpreter’s union.

The interpreter continued working, and days later, tested positive. That prompted about 15 interpreters to self-isolate at home, hampering operations in the courthouse. According to the interpreters union, many were denied requests to go on paid leave, and some continued showing up to the courthouse, either because they feared reprisals for calling out or had no remaining sick time.

One of those interpreters who continued working, Sergio Cafaro, tested positive Dec. 18 and died Jan. 12 at age 56. Five days later, another interpreter, Daniel Felix, 66, died from complications related to COVID-19 after an outbreak at the Bellflower courthouse.

His daughter, Masiel Felix, said her father was only working two to three days per week when he tested positive, and spent the final days of his life in the hospital, barred from seeing his family.

“We feel like this could have been prevented. He could have worked remotely,” she said. “He worked so hard his whole life, and it’s a shame, because he got exposed at work, he didn’t get to enjoy his retirement.”

Inside courtrooms, there’s varying levels of adherence to mandated safety practices. Some lawyers and sheriff’s deputies occasionally remove their masks, while inmates and litigants at times have masks on improperly.

“Judges are very strict with people not chewing gum, looking at cellphones, not wearing a hat,” De Salvo said. “But wearing a mask? That’s another story.”

De Salvo filed a complaint with the state Commission on Judicial Performance after Judge Lynne Hobbs allowed a police officer to testify last summer without a mask. It happened after a defense attorney asked the judge to delay a hearing, arguing that the mask over a witness’ face violated a defendant’s rights by obstructing “the court’s ability to determine credibility.”

From the bench, Hobbs noted the glass shields in her courtroom and, according to the transcript, asked the officer, “Do you feel comfortable taking your mask off?”

“Yes,” the officer replied. The judge gave permission to remove the mask and testify.

“I thought it was outrageous that the judge was doing this and putting us all at great risk,” said De Salvo, who has a 9-year-old son with health problems and whose uncle in Spain died from COVID-19.

Hobbs initially said she had “no memory of anyone testifying in my court without a mask,” writing in an email, “We run a safe courtroom.” The judge did not respond when provided with details from the transcript.

Donlan, the court spokesperson, said the judge was balancing “due process rights and ongoing efforts to protect the public.” 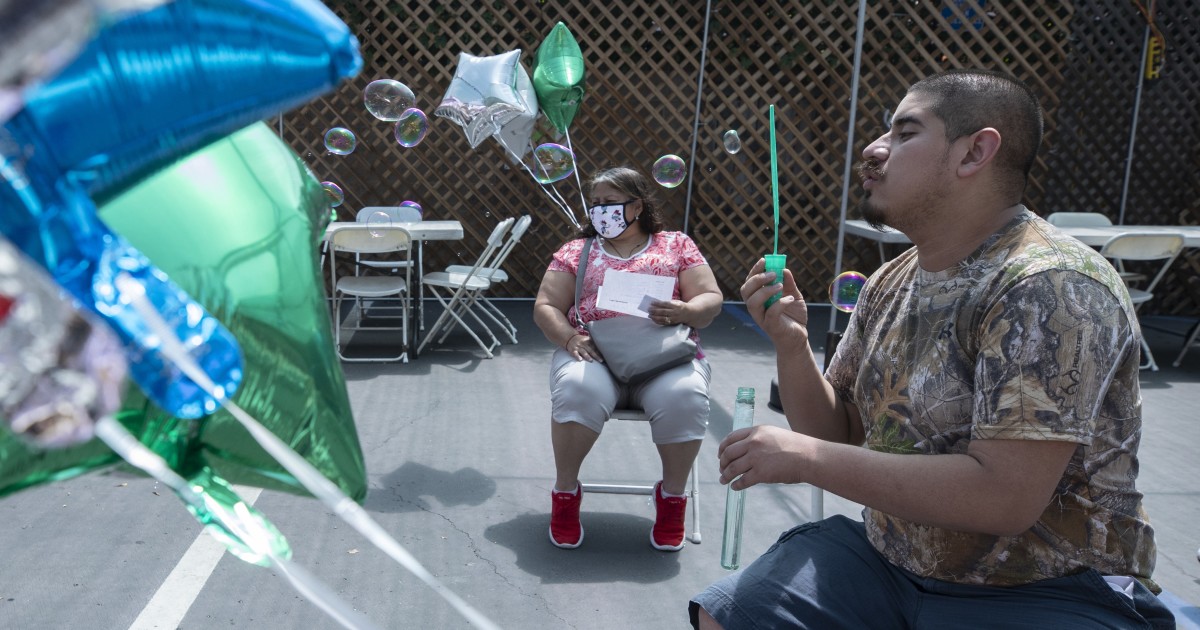 On the same subject :
When needles strike fear, practice comes before the COVID-19 vaccine
Margie Garcia, the mother of an 18-year-old with autism, desperately wants her…

‘I don’t think we should be in here’

Court officials have maintained that its operations are essential and its services, like providing restraining orders in domestic violence cases and protecting defendants’ due process rights, require keeping courthouses open. To see also : Southern California pediatricians call for schools to reopen.

Advocates, however, say many operations are worth delaying, like the traffic citation hearings that occur daily.

“I don’t think we should be in here and jeopardizing us,” said Stephanie Durazo, who appeared in late December for a trial over a citation she received in November 2019. An LAPD officer contended she was driving 48 miles per hour in a 30 mile per hour construction zone near Lincoln Heights, and a judge ultimately sided with the LAPD officer’s account.

Before the pandemic, appearing in traffic court was a way to eliminate a suspended driver’s license imposed for an overdue ticket or failure to appear. But in the spring, the court launched a program that allows motorists to reinstate their license so long as they call and schedule a future court date.

“There is no urgency for a person with a traffic citation to be there now,” said Lauren Zack, an attorney with Public Counsel. Zack, who represents transition-age foster youth in traffic cases across L.A. County, said she was troubled by the ongoing requirement to venture out of the home and come to poorly ventilated courtrooms with little options to social distance.

“I’m seeing a space that is inherently unsafe,” Zack said. “With traffic court, the only justification to why they are moving people through is to collect fines and fees.”

With eviction hearings, the stakes are far greater.

In 2020, there were 14,000 residential eviction cases filed in L.A. Superior Court — a 66% decrease from the previous year — and trials are continuing “every week,” said Lorraine Lopez, a supervising staff attorney with Public Counsel.

Lopez said her organization and other legal aid groups have repeatedly asked judicial leaders to put a stop to eviction proceedings, citing health and safety of lawyers, clients and court staff.

“I understand landlords are hurting. We are not trying to avoid trials or cases from going forward,” Lopez said. “If we are told not to congregate with those outside our homes, that should include the courts.” 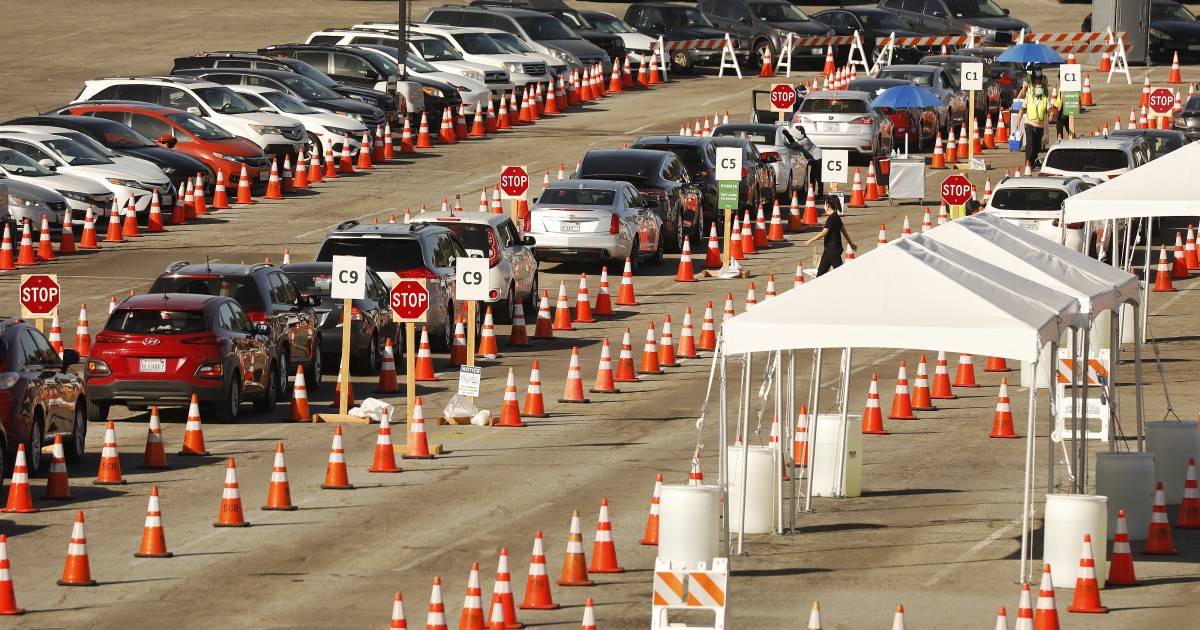 On the same subject :
L.A. COVID vaccine sites reopen after Chauvin verdict closure
COVID-19 vaccination sites run by the city of Los Angeles are back…