The Orange County Health Care Agency has issued an order that forbids hospital emergency rooms from redirecting ambulances to other medical facilities.

The order — the first of its kind in the region — went into effect at 7 p.m. Tuesday after 20 of the county’s 25 emergency medical centers became so overwhelmed with COVID-19 patients that they began diverting ambulances to other facilities in Orange County. As a result, ambulances were having difficulty finding a hospital that would take patients.

“This is not sustainable,” Carl Schultz, emergency medical services director for the Orange County Health Agency, said in a written statement.

Schultz said ReddiNet, the web-based emergency communications system that is used to report hospital, patient and emergency event status, would not accept “diversion status” from hospitals for a period of 72 hours. Hospital diversion is defined as a notification that patients who are arriving by ambulance will not be accepted by the receiving facility.

“If the situation remains at its present state, this suspension of diversion will continue,” Schultz said, acknowledging the stress it would put on hospitals. “I acknowledge these directives will be challenging to implement, but current circumstances dictate such action is required to support the EMS system.”

The flood of COVID-19 patients has put unprecedented pressure on Orange County hospitals amid rising concerns about the potential collapse of the region’s emergency medical system. In an effort to help, the county said it would deploy mobile field hospitals, which help expand hospital capacity by adding additional beds to existing grounds.

In a news release, Orange County health director Dr. Clayton Chau said the deployment of the field hospitals “sounds alarming because it is alarming.”

“I implore our residents not to gather with other households and limit upcoming holiday celebrations to those you live with,” he said.

One medical professional at St. Jude told Orange County Supervisor Doug Chaffee that the hospital was reaching its limit.

“They’re using every available bed,” Chaffee told City News Service. “The emergency department has an overflow. … All the Orange County hospitals are in the same situation.”

The state has opened temporary field hospitals in Costa Mesa, Porterville, Sacramento and Imperial, with other facilities on standby in Riverside, Richmond, Fresno, San Diego and San Francisco.

According to the latest state data, there were 1,486 coronavirus-positive patients hospitalized in Orange County as of Wednesday — an all-time high that’s more than double the total from two weeks ago.

The number of COVID-19 patients in intensive care had risen to 319 countywide on Wednesday. A month ago, there were 85.

The county is also dealing with an uptick in outbreaks at skilled nursing homes, assisted living facilities and county jails.

As of Wednesday, 32 skilled nursing facilities and 36 assisted living facilities had at least two confirmed cases of coronavirus infection. An outbreak in the county’s jails that started last week has now infected 627 inmates, up from 416 reported Monday. The county is awaiting results of 86 more tests.

Dr. Paul Sheikewitz of Providence St. Joseph’s Hospital in Orange, who was among the first to receive the Pfizer vaccine Wednesday, said the hospital was nearing its limit.

“Last summer, when we had our surge over July, we had the National Guard in here helping us. … But, frankly, this surge we have 75% more patients than the last surge,” he said. “It has challenged us.” 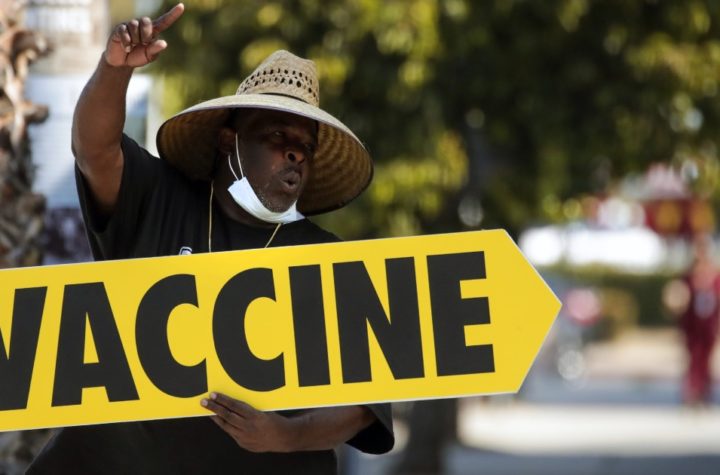 Delta variant is rising. Breakthrough infections too. How should I protect myself?

Delta variant is rising. Breakthrough infections too. How should I protect myself?