It’s what to do about the emotional scars that could prove to be UCLA’s greatest challenge this week.

The morning after experiencing heartbreak during a 43-38 rivalry loss to USC, the Bruins learned Sunday that they would play Stanford on Saturday evening at the Rose Bowl in their final regular-season game.

It might be the perfect scenario for UCLA to remember what it feels like to turn the page given what happened between the teams last season: The Bruins enjoyed a psychologically purging victory over the Cardinal, ending an 11-game losing streak in the series and sparking an impromptu, if slightly off-key, singing of the fight song in the locker room.

Stanford coach David Shaw has dubbed this the “What-if Season” for his team after a string of misfortune stretching all the way back to September. The Cardinal had two top players opt out to prepare for the NFL draft, were deprived of starting quarterback Davis Mills during a loss to Oregon because of a false positive test for COVID-19 and spent the last two weeks camped out in the Pacific Northwest after local health restrictions barred them from playing on their home field.

“We can’t live in would’ve, should’ve, could’ve,” Shaw told reporters late Saturday after his team’s come-from-behind 27-24 victory over Oregon State made the Cardinal (3-2) one of the Pac-12’s hottest teams. “We’re going to live in the world of being on a three-game win streak and being over .500 and hopefully building some momentum for next week.”

The Bruins (3-3) know all about regrets after committing three turnovers and allowing the Trojans to outscore them 20-3 in the fourth quarter, the first time UCLA had been outscored in the final quarter all season.

There was questionable clock management in the final minute after UCLA coach Chip Kelly did not call a timeout when USC wide receiver Tyler Vaughns made a spectacular catch to give the Trojans the ball at the Bruins’ eight-yard line. That allowed roughly 20 seconds to elapse before USC’s Amon-ra St. Brown made a leaping grab in the corner in the end zone and left UCLA with only 16 seconds to stage its frantic final drive.

USC’s go-ahead score also came after the second of two special-teams blunders when the Bruins gave up a 56-yard kickoff return. The first came in the third quarter after Luke Akers failed to get off a punt and fumbled, giving the ball to the Trojans at the UCLA 31-yard line and leading to a USC touchdown.

“We have to be able to cover a kick and we didn’t,” Kelly said of the late return.

Much of the postgame scrutiny centered on Kelly’s decision to have redshirt freshman Keegan Jones carry the ball on fourth and one with a little more than four minutes left in the game. Jones got stuffed for no gain, giving the ball back to USC on a turnover on downs.

Kelly explained afterward that Jones got the carry because he was in the game, but Kelly could have easily used a timeout to insert Demetric Felton Jr. or Brittain Brown, the Bruins’ primary running backs.

In fairness to Jones, UCLA has struggled with conservative playcalling on fourth downs all season, usually relying on predictable runs up the middle. The Bruins failed on all three of their fourth downs Saturday and have converted only five of 15 for the season, their 33.3% success rate ranking them 10th in the Pac-12 and tied for No. 118 nationally.

Salvation could come with a victory over Stanford that would make UCLA bowl eligible for the first time since 2017 after Pac-12 commissioner Larry Scott stipulated that conference teams needed at least a .500 record to participate in the postseason.

Beating the Cardinal will involve moving on quickly from the Bruins’ most disheartening loss in years. UCLA quarterback Dorian Thompson-Robinson called it the quietest locker room he had witnessed in college and safety Quentin Lake didn’t try to sugarcoat his bitterness.

“I mean, I think everybody’s hurt,” Lake said. “There’s no, we’ll-get-it-next-time. This will probably be weighing on my mind for tonight and tomorrow, but just knowing I’ve got to come Monday ready to work … go out here and play UCLA football again, so using that as a little kick-start to help our morale, but this one hurts, it does.”

UCLA tight end Greg Dulcich finished the game with career highs in catches (eight) and receiving yards (167), including a 69-yard touchdown that was the Bruins’ longest play of the season. This may interest you : Chargers prepare to close season not knowing what future holds. … Thompson-Robinson’s 364 passing yards moved him into ninth place on the school’s career chart with 5,067 yards, surpassing Wayne Cook (4,723). 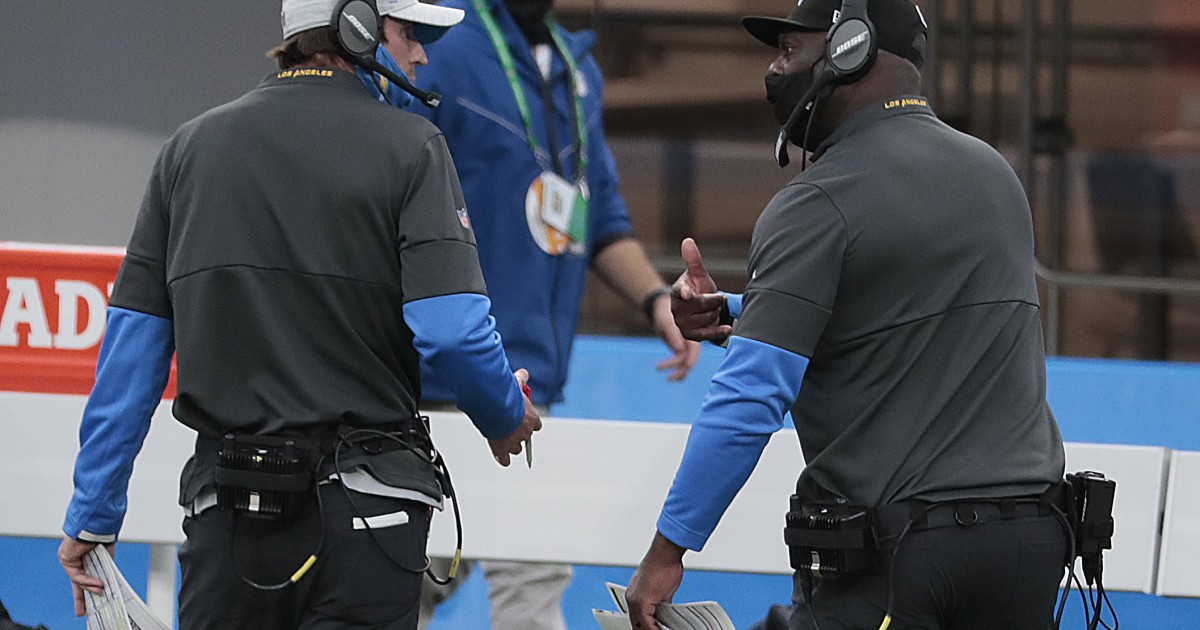 To see also :
Chargers’ issues could make them a permanent joke in L.A.
From their opponents’ eight-yard line, the Chargers ran the ball.With 22 seconds…