Last September, Utah was a three-pointer away from facing the Clippers in the postseason.

More than four months later, the Clippers know this week they will get the Jazz’s best shot.

Even as LeBron James’ age-defying feats keep the Lakers near the top of the Western Conference, and the Clippers have done little to lower expectations of a long postseason run, no team during the last five weeks has matched the sheer success that has given Utah the NBA’s best record entering two matchups this week against the Clippers at Staples Center.

After a win Monday over East-leading Philadelphia, in which Utah brushed off a 14-point hole to eventually lead by as many as 16, the Jazz (23-5) have won 19 of their last 20. They rank among the top four in offensive and defensive ratings. No other team is even in the top 10 in both categories.

Even without the services of Mike Conley, the star guard enjoying a bounceback season, for the last five games because of a tight hamstring, the Jazz have beaten Indiana, Boston, Milwaukee, Miami and Philadelphia — with four victories by at least 11 points.

“They’re No. 1 in the West for a reason,” Clippers guard Reggie Jackson said. “They’ve been playing tremendous and we feel like we have to protect our house.”

Anchored by the rim protection of center Rudy Gobert, Utah is allowing opponents a league-low 50.1% effective field goal percentage, and the lineup of Gobert, Conley, Bojan Bogdanovic, Royce O’Neal and Donovan Mitchell has outscored opponents by a league-leading 117 points in the last 20 games. No other lineup with at least 50 minutes together during that time has produced a plus/minus higher than 62.

In few words, Clippers forward Marcus Morris summed it up.

Whereas the Clippers and Lakers spent their offseason reinventing their rotations, the Jazz built this start by returning last season’s top seven. That includes guard Jordan Clarkson, who after scoring 40 on Philadelphia is averaging 18.2 points, second most behind Mitchell’s 24.2. They are two of the six Jazz averaging double figures in scoring, a number that doesn’t include big man Derrick Favors, a key offseason signing who’s helped Utah choke off areas where opponents want to shoot most. The Jazz rank among the NBA’s best in field goal percentage allowed both within five feet and beyond the three-point arc.

Even with such continuity, the roster of last year — that saw its postseason end when Conley’s three-pointer rimmed out as time expired in Game 7 of a first-round loss to Denver — is not the same as now. Gobert, speaking to the Athletic this month, said a “very honest conversation” helped him and Mitchell mend the rift created by Gobert’s positive test for the coronavirus in March, and Mitchell and other teammates subsequently testing positive too.

And Bogdanovic, after missing the league’s restart last summer following season-ending wrist surgery last May, is averaging 15.6 points on 39% shooting from deep for the team taking a league-high 42 three-pointers per game and making nearly 17 of them. Opponents trying to limit Utah’s quality three-point attempts through switching run the risk of being beaten off the dribble.

“They don’t just have one guy, their entire team is locked and loaded and ready to shoot,” Jackson said. “They’re really gonna try and put pressure on us, making us protect the line as well and not get beat off the dribble on any straight line drives. It’ll be a great test for us. I think we’re happy to get them twice, honestly.”

If the series is, as Jackson suggested, a litmus test of the Clippers’ capabilities, it’s all the more important because it marks the teams’ final matchups of the regular season. They already played Jan. 1 in Salt Lake City, a Jazz victory.

Yet the series also carries long-term stakes. With uncertainty surrounding the Lakers because of a calf injury that could sideline star Anthony Davis for weeks, and the Clippers playing shorthanded too — they won Monday without Kawhi Leonard (left leg contusion) and Paul George (right foot swelling) for a second consecutive game, along with two other missing starters — this marks Utah’s opportunity to finally add distance between itself and its challengers for the West’s top seed.

That the Jazz are only two games up in the standings despite winning 19 of their last 20 is an indication of what has allowed the Clippers to remain so close.

Since its 20-game run began, Utah leads the league in net rating but the Clippers are second, the only other team to record a positive double-digit net rating. The Clippers remain the NBA leader in three-point accuracy and among the best at limiting turnovers and the damage caused by them.

“We’re gonna get some guys back and, I think, we can really see as a team that we’re trending in the right direction,” Morris said. “Those will be two good wins for us if we get those so we’re excited, we’re preparing and I think it’s gonna be a really good game.”

Harder to quantify but easy to spot is that even without George and Leonard, the Clippers beat Cleveland on Sunday and Miami 24 hours later by playing with a grit not seen in two seasons. The by-committee approach has leaned on Morris’ 50.5% three-point accuracy, the resurgence of Lou Williams, who is averaging 21.1 points on 41% three-point shooting in his last seven games, and contributions from young players including center Ivica Zubac and guards Terance Mann and Amir Coffey.

“We’ve all been watching,” Morris said of Utah. “They’ve been beating a lot of good teams.”

The Clippers’ challenge is avoiding the same fate. 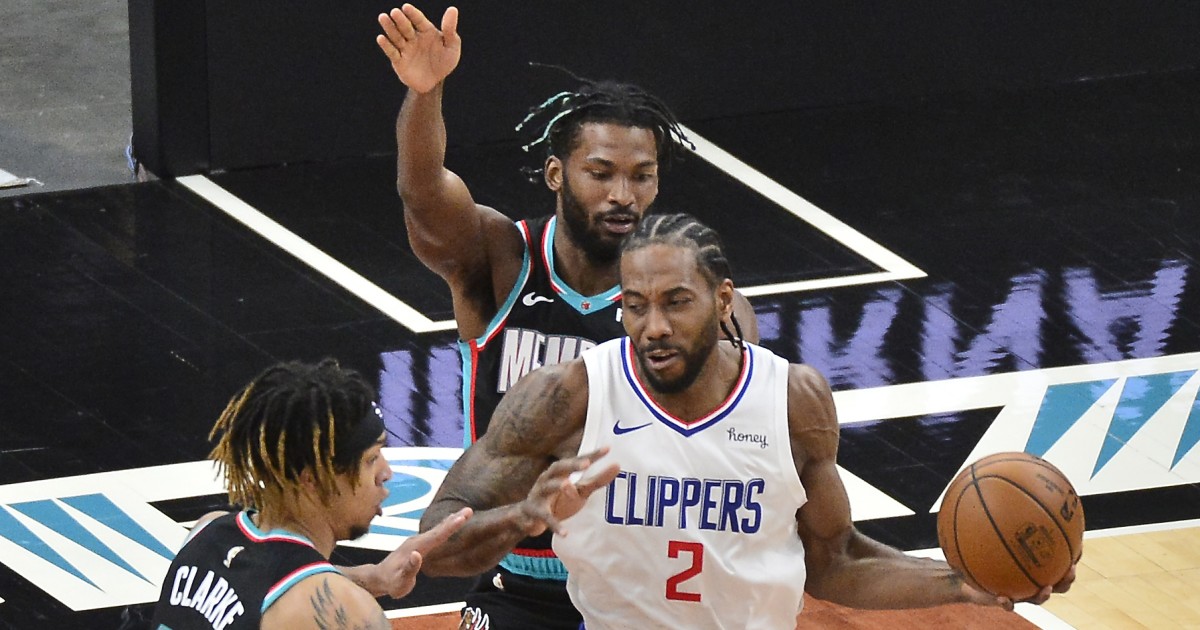