Playing in a defensive front between Aaron Donald, a two-time NFL defensive player of the year, and veteran team leader Michael Brockers, it can be difficult for a young Rams player to make a name for himself.

Sebastian Joseph-Day is doing that on and off the field.

Joseph-Day, a third-year pro, is the starting nose tackle for a Rams defense that ranks among the NFL’s best going into an NFC West showdown Sunday against the Seahawks in Seattle.

The Rams can earn a playoff berth — and keep alive a drive for a division title — with a victory.

“He’s kind of a commander in there in the middle,” first-year defensive coordinator Brandon Staley said of Joseph-Day. “He’s almost like a quarterback of the D-line.”

And since the COVID-19 outbreak began, Joseph-Day has been at the forefront of several individual and collective charitable initiatives.

In April, Joseph-Day donated $10,000 and partnered with Rossoblu’s Restaurant Relief to help fund 250 meals for frontline Cedars-Sinai Medical Center personnel and their families. He also hosted a fundraising drive on social media for a similar effort at Centinela Hospital Medical Center in Inglewood.

In July, Joseph-Day partnered with the “I Have a Dream” Foundation to provide laptops and internet hot spots for students in Watts. He also worked with the NFL Players Coalition to disperse educational funds to Los Angeles-area schools.

This month, Joseph-Day and Brockers each donated $12,500 to the St. Margaret’s Center in Inglewood to help families during the holiday season. And he was an active and vocal participant in a Rams team initiative that donated and distributed $750,000 to 26 Southern California nonprofits focused on social justice.

Joseph-Day said he learned about “passing on blessings” and giving back from his mother, Mirlande, and father, Vivens, while growing up in Pennsylvania.

“That’s really instilled in me,” he said. “It’s just the way I kind of live my life.”

Multiple Rams players have made significant contributions to charitable causes independently and through their foundations. Offensive lineman Andrew Whitworth, the team’s nominee for the Walter Payton Man of the Year award, has led multiple individual and team charitable efforts since he signed with the Rams before the 2017 season.

Cornerback Jalen Ramsey made a $1-million donation to Purpose Preparatory Academy, a kindergarten through fourth-grade school in his hometown of Nashville. Donald funds the “AD99 Solutions Foundation” to provide opportunities for underprivileged kids in Pittsburgh. Brockers has been active in Los Angeles and his hometown of Houston. Quarterback Jared Goff has donated money and time to the Inglewood Unified School District. And other veteran players also have made sizable donations to various charities and causes.

What sets Joseph-Day apart is his salary.

Joseph-Day, 25, was a sixth-round draft pick in 2018. He signed a four-year $2.6-million contract and is earning about $789,000 this season. That is well below the tens of millions earned by older, more high-profile teammates who have signed two or more NFL contracts.

A good deed is a good deed regardless of how much money one earns, Joseph-Day said.

“You’ve got a guy that’s taking coaching and learning from older guys around him — at the same time he’s dominating.”

“I want to do a lot more,” he said, adding, “I can’t wait till, hopefully one day, I can sign a second contract to financially be able to make an ever bigger impact because I have really big goals when it comes to that.”

Joseph-Day played in college at Rutgers. After the Rams selected him with the 195th pick in the 2018 draft, he attempted to absorb as much as he could from Donald, Brockers and Ndamukong Suh in what essentially became the NFL equivalent of a college redshirt season.

Joseph-Day was on the roster the entire season in 2018 but was not active for any games. It was an exciting but nerve-racking time for a young player attempting to prove he belonged in the NFL.

The Rams advanced to the Super Bowl, but Joseph-Day said it was difficult to feel part of it because of his limited role.

After the 2018 season, coach Sean McVay hired Eric Henderson to replace Bill Johnson as defensive line coach. Suh became a free agent and the Rams chose nose tackle Greg Gaines in the fourth round of the 2019 draft.

The 6-foot-4, 310-pound Joseph-Day set out to earn a starting opportunity.

“He balled out in the offseason,” Henderson said. “He just took that thing to another level. He was coachable, and he allowed himself to truly grow — and he’s still getting better.”

Last season, Joseph-Day started 15 games and made 44 tackles, including two sacks, for a team that finished 9-7 and missed the playoffs.

This season, the Rams rank first in the NFL in fewest total yards allowed per game as well fewest passing yards allowed. They are also second in rushing defense and third in scoring defense. Joseph-Day has 52 tackles, three passes knocked away and one forced fumble.

“You’ve got a guy that’s taking coaching and learning from older guys around him — at the same time he’s dominating,” Donald said.

He also is asserting his personality. Joseph-Day said he was “super silent” around most teammates during his first two seasons. But he was vocal in the aftermath of the killings of Breonna Taylor in Kentucky and George Floyd in Minnesota by law enforcement and the police shooting of Jacob Blake in Wisconsin. And he has continued to find his voice in the midst of the COVID-19 pandemic.

“It kind of made me show who I truly am,” he said.

Joseph-Day is focused on helping the Rams defeat the Seahawks and return to the playoffs.

In January, he will launch an online series highlighting the food and culture of Los Angeles restaurants and the owners’ stories of perseverance. The goal, he said, is to help people in L.A. connect.

“That’s just the way I’m built, the way I’m wired,” he said. “I’m definitely not satisfied with what I’ve done.

“I have a vision to help people out. It’s a huge goal of mine, and a huge part of why I long to leave a legacy here.”

The Rams practiced at SoFi Stadium for the second times this season. Read also : Chargers vs. Falcons matchups: L.A. aims to rebound from rout. … Offensive lineman Rob Havenstein (neck) was limited in practice, according to the Rams’ injury report, but is on track to play against the Seahawks, McVay said. 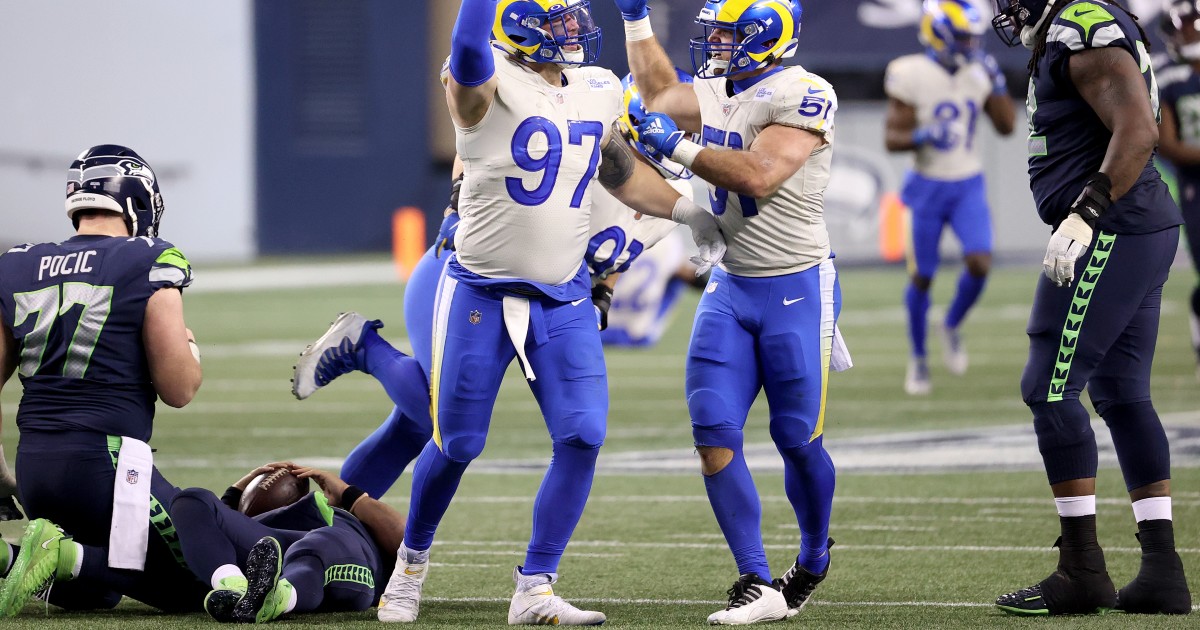 Read also :
What we learned in Rams playoff game win vs. Seattle Seahawks
Jared Goff acknowledged that his surgically repaired right thumb was not 100%.But…