Names and jargon that were once the province of obsessive day traders have become the subject of small talk — and the source of major angst — in the last few days as a series of down-at-the-heels stocks have rocketed to previously unimaginable heights.

With a money-losing video game retailer minting millionaires and showing the vulnerability of the stock market to coordinated action and mass hysteria, even the Nasdaq-indifferent are paying attention. Parents and cousins are texting about it. And as of Thursday morning, Congress members were sternly tweeting at a Silicon Valley startup that had been making it easy — some would say too easy — to get a piece of the action.

Yes @aoc. We need an investigation into RobinhoodApp’s decision and who influenced that. And this shows the need for a financial transaction tax on hedge fund shorting and SEC regulations on short selling practices. https://t.co/mYX8Ab3JwH

These reactions from Reps. Alexandria Ocasio-Cortez (D-N.Y.) and Ro Khanna (D-Fremont) came after Robinhood, the day-trading app that saw massive user growth over the course of 2020, decided to block its users from buying or trading a set of stocks that had been whipped up to astronomical prices by a combination of gigantic Wall Street hedge funds and individual investors, based on a strategy cooked up in a popular section of the online forum Reddit called WallStreetBets.

The blocked stocks are mostly of troubled companies, including Tootsie Roll, AMC, Bed Bath & Beyond and, most famously, GameStop, which has risen from $17.25 at the beginning of January to a high of $347.51 on Wednesday.

A retail trading app, Robinhood gives users an easy way to log in and start trading stocks. By the summer of 2020, more than 13 million people had signed up, stuck at home and looking to cash in on the rising stock market, which in turn was buoyed by near-zero interest rates set by the Federal Reserve.

That newfound popularity has brought more scrutiny to the company, with critics saying it gives inexperienced users too much access to complicated financial products, which may lead to financial ruin, life-altering debt and, in the case of one 20-year-old trader, suicide. Following a $65-million settlement with the SEC over allegations that the company gave customers bad prices on trades, a group of users filed a class-action suit against the company in December for allegedly failing to inform them that it sells their stock orders to trading firms, which can then profit off of price arbitrage and the knowledge gleaned from watching millions of trades go by.

But Robinhood’s popularity also meant that when individual investors on the WallStreetBets forum hatched a plan to execute a potentially lucrative financial maneuver with the stocks of Gamestop and other down-on-their-luck companies, Robinhood became a key interface between this mass of investors and the stock market.

The financial maneuver in question began with users online noticing that GameStop stock was heavily shorted, as Times columnist Michael Hiltzik laid out earlier this week, meaning that a number of large financial firms had placed bets that its stock would go down.

The Redditors saw an opportunity. If they could push the price of GameStop stock up by simply buying a lot of it, then at a certain point all the short-sellers would be forced to buy the Redditors’ stock at the new high price. This could happen for three reasons: The short-sellers might buy the inflated stock to hedge against their growing losses on the same stock from the short, they might decide to bail on their short position early before things get worse, or they might be forced to buy the stock at the date specified in their original short orders. Regardless, the theory goes, the investors riding the upswing have a locked-in pool of buyers.

The shorthand for this maneuver is a short squeeze — and in the case of GameStop, a number of the short contracts are set to come due in the weeks to come. In the past four days, short-sellers have already lost more than $5 billion.

But, you might be asking, how did the price of the stock get pushed so high? A full accounting of what’s gone on this week will need to wait until the dust has settled, since billions of shares have been sloshing around just for GameStop, but a few basic dynamics are at play.

First, many investors decided to buy options, rather than the stock itself; these options are contracts with a middleman that give the investor the right to buy a certain quantity of stock at a certain price at a certain date in the future. If the market price is higher than the option price on that date, the investor makes money on the difference.

The middleman often buys a number of shares in the same company to cover their potential losses if the stock happens to skyrocket. This means that investors buying options can double their impact on the stock, moving twice as many shares as they can afford. That potential downside for the middleman is known as gamma, so this particular effect is called a gamma squeeze.

Second, a lot of big investors caught wind of this plan, which was laid out in great detail in public, and decided to join in. This moved the stock price even higher, which drew more press coverage and investor interest, which fueled more investment, and so on.

Third, Elon Musk tweeted about it on Tuesday night.

By Wednesday morning, the stock had hit nearly $350, with more buyers piling on and more short-sellers white-knuckling it on the expectation that the bubble would soon burst. Just before midnight, Robinhood sent out a notification that it would block users holding options on GameStop and AMC from buying more options — they could only close out their deals, stopping the cycle. The next morning, the company posted an announcement that the restrictions also applied to 11 other stocks, including Blackberry, Express, and Tootsie Roll.

On Thursday, users posted on social media showing that Robinhood was automatically selling their holdings in the stocks in question. When reached via email, a spokesperson for the company noted that they had informed customers that they would “take proactive measures to reduce risk, including closing at-risk positions prior to expiration date.”

By the afternoon, Sen. Sherrod Brown (D-Ohio), chair of the Senate Banking Committee, announced that he would be holding a hearing on the “current state of the stock market”; Republican Sen. Pat Toomey said that he found it “disturbing” that Robinhood would lock people out of making trades; and a group of users filed a new class-action suit against the company for its decision to block the stocks.

As the market closed on Thursday with GameStop down from its Wednesday highs but still significantly above its Monday starting point for the week, other trading platforms were scrambling in their response, with some following Robinhood’s lead and others allowing GameStop trades to resume in the afternoon. On WallStreetBets, users continued to post encouragement for their fellow speculators to stick it out and hold strong for a supposed spike to come on Friday.

What’s next for GameStop? The actual company at the heart of this frenzy has stayed mum this week, putting out a statement Thursday about winning an award for having a LGBTQ-friendly workplace that made no mention of the stock’s volatility.

A Los Angeles GameStop employee, who happened to pick up the phone when reached at the store at Slauson and Western avenues, declined to share their name but did note that the financial furor had not yet changed anything about their job. “It’s business as usual here,” they said. “I’m just here to sell games.” 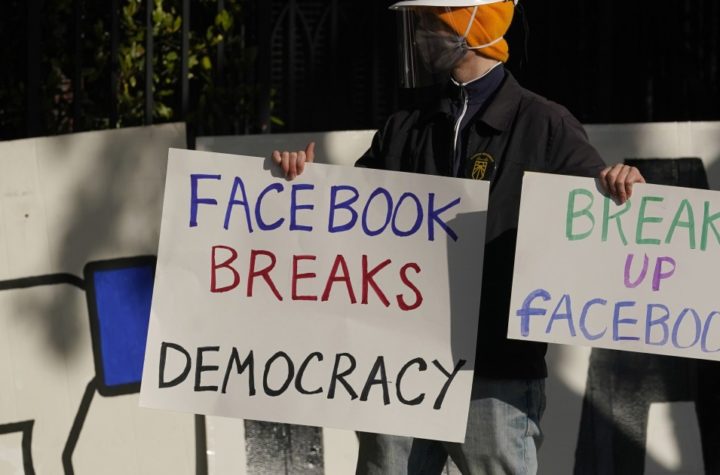 Facebook cracks before the Chauvin verdict. Why only now?

How Albert Brooks got Meryl Streep for ‘Defending Your Life’