In a move that reflects the desperation of teachers, nurses, healthcare, grocery and hotel employees, their influential unions are calling for a strict month-long Los Angeles County shutdown in January to control the raging COVID-19 pandemic, save lives and ultimately allow for a quicker reopening of schools and the economy.

Evidence of mounting frustration and anxiety has also emerged in newly released surveys of teachers and parents as most campuses across L.A. County remain closed to in-person classes.

The union coalition called for what it described as a “circuit breaker” in a letter Wednesday night to the county Board of Supervisors and in an online petition. The letter demands stricter health orders, stronger enforcement and an infusion of aid from the state and federal government to keep workers and their employers afloat.

Federal officials appear likely to approve an aid package, but there’s deep debate about whether it would go far enough.

The proposed circuit breaker would resemble the near total shutdown in March and “would lower cases to relieve the pressure on hospitals and healthcare workers, allow state and local health agencies to strengthen the testing and tracing system, and allow the system to work better to prevent future surges in viral transmission,” according to the letter. It was signed by United Teachers Los Angeles, Unite Here Local 11, California Nurses Assn., United Food and Commercial Workers Local 770 and three other unions, several community groups and medical experts.

When the county board meets Tuesday, this push will represent a political counter to pressure from businesses and allied groups that want to limit commercial restrictions. They’ve sued to overturn a ban on outdoor dining.

A main organizer of the union initiative was the teachers union, which also represents nurses, counselors and librarians in Los Angeles Unified, the nation’s second-largest school system.

”Let’s be clear — we are not in a real lockdown,” said UTLA President Cecily Myart-Cruz. “While some people are able to stay home to work, the working-class and poor people of L.A. have to choose between risking their lives or putting food on the table for their families.”

A shutdown must be accompanied by “a financial survival package for workers,” she said. “Without that, it’s clear that elected leaders expect workers to risk their lives in order to pay rent.”

Some union members quickly echoed the call by their leaders.

Respiratory therapist Michael Rivera, who normally specializes in neonatal pediatrics, described a harrowing situation at Providence Cedars-Sinai Tarzana Medical Center. He’d just worked with a patient being moved into what he understood to be the hospital’s last available intensive-care-unit bed.

“This dwarfs the L.A. riots,” said Rivera, a member of the National Union of Healthcare Workers, who used to work in South Los Angeles. “It doesn’t even move the needle compared to the carnage we’re seeing now.”

Rivera was taking a 30-minute break in a shift he expected to last at least 12 hours. Within the last week, he worked a 24-hour shift.

The letter from the union coalition, in essence, restates what the nurses association has long called for, said Stephanie A. Roberson, the union’s director of government relations.

Hotel and restaurant workers have been hit hard both by the virus and job losses, said Kurt Petersen, co-president of Unite Here Local 11. About 90% of the union’s 30,000 members have lost their jobs in California and Arizona. And in October — when infection rates were lower — 20% of union members were testing positive for the virus, according to the union’s healthcare provider. Petersen said he hears of a member dying every week.

Housekeeper Liliana Hernandez has managed to stay healthy so far, but she lost her job at a Santa Monica hotel in March. So did her husband, who buses tables at a restaurant. He returned to work in July, only to be laid off again the week before Thanksgiving. Previous government aid has allowed them to survive up till now. She sees the call for a circuit breaker — and the possibility of new aid — as a lifeline.

“I’m very worried because colleagues from other places, worked one or two weeks got sick and passed away,” she said. “It’s going to be better if people stay home.”

She’s also worried about her son, a senior at Bernstein High School in Hollywood, who is mired in distance learning. He struggles to stay focused and has trouble getting the help he needs. Their family’s experiences are mirrored in a just-released parent survey by the advocacy group Speak Up.

In the survey, 70% of families reported problems keeping their children focused. Three in 10 families have difficulty paying for internet and close to half have inadequate service. More than half of parents reported that their children are grappling with mental health issues; nearly half reported students receiving lower grades.

Speak Up asserts that schools should be open to the extent possible under county health rules and that distance learning needs to be improved for those families who don’t wish to return to campus.

Teachers painted a similar picture of distance learning in a survey commissioned by Educators for Excellence-Los Angeles and USC Rossier School of Education.

More than half of over 500 Los Angeles public school teachers said that the lack of access to high-speed internet presented a “very serious” challenge, increasing to two-thirds for those with students primarily from low-income households. And 94% of teachers reported low student engagement as a serious obstacle.

Lisa Bennett, a 2019 teacher of the year honoree in L.A. Unified, is doing what she can as she works online with her class of students with disabilities, who would normally attend Van Gogh Elementary in Granada Hills.

“I know that effective teaching happens best in a brick-and-mortar classroom,” said Bennett, who has underlying health conditions that would put her at high risk for COVID-19.

One student was going to grandma’s to do schoolwork because her mother had to work, Bennett said. Then both the mother and grandmother were sick with COVID. She supports the circuit breaker and an aid package.

“It’s a pandemic,” she said. “This has never been seen in our lifetime.” 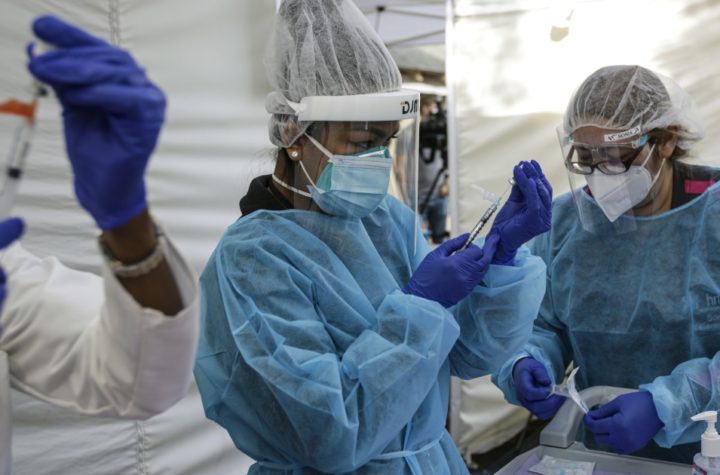 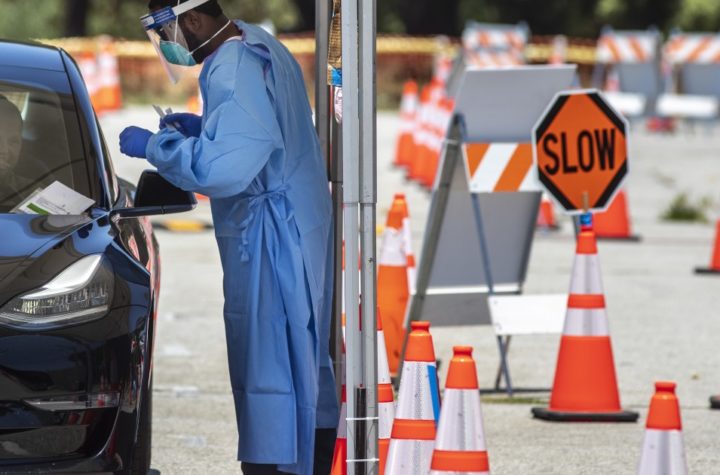