Youth football and other high-contact outdoor sports will be permitted to resume in Orange County beginning Friday, bringing the county in line with recent guidelines released by the California Department of Health, officials said Tuesday.

The California Department of Public Health’s revised guidance on youth sports cleared the way for high-contact sports such as football, field hockey, rugby and water polo to resume Friday in counties that are in the purple and red tiers if the county has a COVID-19 case rate at or below 14 per 100,000 people. Orange County met the benchmark Tuesday, said Orange County Health Care Agency Director Dr. Clayton Chau.

The county’s adjusted case rate is 11.9 per 100,000 people, and the positivity rate is 5.4%, data show. Under previous guidelines, sports in which players are in close contact with one another could be played only if a county reached the far less restrictive orange tier with a positivity rate between 2% and 4.9%.

“This is very big news,” Chau told the Board of Supervisors on Tuesday. “This will be something for the children to look forward to.”

Los Angeles and San Luis Obispo counties also met the state’s standard Tuesday with adjusted case rates of 12.3 per 100,000 and 9.4 per 100,000, respectively. Ventura, San Bernardino, Riverside and Santa Barbara counties did not meet the threshold.

High school sports were paused in March when campuses shut down as COVID-19 began spreading across the state. In July, the CIF, the state’s governing body for high school sports, delayed the 2020-21 fall sports season as cases continued ticking up across California. After months of sitting on the sidelines, coaches, parents and athletes have rallied in front of schools and put pressure on state officials for the return of competitive sports.

“We are now prepared to enter another phase of this journey we have been on for almost an entire year,” Rob Wigod, commissioner of athletics for the CIF Southern Section, wrote in a statement last week. “From the very beginning, we have always tried to keep the focus on student-athletes, doing all we can to come through for them and be able to resume our education-based athletics programs.”

Under the state guidance, weekly testing will be required for coaches and football, rugby and water polo players who are at least 13 years old. The guidance also notes that competitions are permitted only between teams within the same county or from bordering counties where the sport is allowed.

Marina High School Athletic Director Michelle Spencer said last week that she’s ready to do whatever it takes to make sure student-athletes are back competing as soon as possible.

“We’re excited,” Spencer said. “We’re going to do everything we can to get every team possible in the pool or on the field. That’s our commitment, so we’ll figure out the testing. Whatever they want to throw at us, we’ve got this. We’ll figure it out.”

As the county begins allowing more activities to resume, health officials are also pushing forward with vaccine efforts despite supply hurdles that have hampered the rollout.

The county Tuesday opened its third large-scale COVID-19 vaccination site at the Anaheim Convention Center in an effort to increase the number of inoculations. Health officials have said opening more sites is key to achieving their goal of getting all residents vaccinated by July 4.

More than 500,000 doses had been administered in Orange County as of last week, according to county data.

The county was forced to close the Disneyland vaccination site indefinitely last week after severe winter weather across the country delayed vaccine shipments. The county received the doses it was expecting last week on Tuesday morning and should receive this week’s allocation Thursday. The Disneyland site is expected to reopen Wednesday, Chau said. 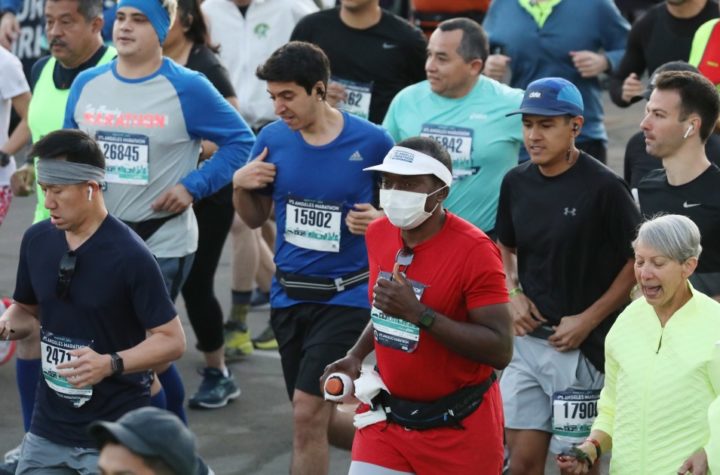